The development still has 10,000 people in 10 storey buildings that almost doubles Cleveland’s population. And the proposed 100 metre buffer is still too close. Walker’s own Environmental Impact Statement confirms that: ‘[it] will have significant impact on migrating, endangered shorebirds and wetlands of international importance.’ The revised plans also show a significant reduction in new foreshore parks.

Dredging sucks millions of marine creatures into oblivion and robs dugong and turtles of feeding grounds. There will be damaging mud plumes drifting across the Moreton Bay Marine Park for years. ‘Mud is a killer’ says marine scientist, Dr Charlie Veron. ‘All soils become toxic in a marine environment when disturbed.’ 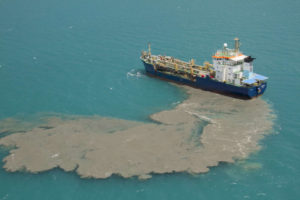 Click this link to see how Moreton Bay’s wildlife and fishing  are under threat from this development.

Dredging will destroy 34 hectares of sea grass and result in more dredging spoil than that required for Abbot Point. It will mean tens of thousands of trucks carting spoil through town for over 10 years and 20 years of construction dirt and noise. Walker’s development application says that work will continue from ‘February 2019 to February 2039.’

Don’t be persuaded that we need to put up with this development because the harbour needs upgrading. It’s an excuse to build a ten-storey township out to sea. The fact is that the present – and any future – harbour in a similar location is unsafe and unsound environmentally. It will also be unsightly.

More vessels go aground in the approach channel than anywhere else in Queensland because it is narrow, shallow and difficult to navigate in strong winds, and with drying banks either side there is no margin for error. This has resulted in many groundings over the years, the last one in December 2015 left 200 passengers stranded till several hours after nightfall. A refurbished harbour will not stop this danger.

The channel needs constant dredging which kicks up mud, which damages seagrass meadows and is gradually wiping out 50 hectares of adjacent coral beds and wetlands providing habitats for fish and crustaceans.

The 1996 draft of the Moreton Bay Marine Park Zoning Plan considered the east side of Cleveland Point, down to Point Halloran, deserved the highest protection, but this couldn’t be implemented due to high volumes of traffic using the harbour. The report also called for a go-slow area declared for boats as there is a turtle and dugong habitat nearby and the silt from prop wash was damaging adjacent seagrass and coral beds.

A 2014 workshop considered this development and the Straddie departure point

Deliberating over 2 days, a well-informed team of impartial specialists and community members suggested that the Straddie departure point should be on the western side of Cleveland Point, an area already oriented towards boating facilities with VMR and a Boat Club. According to marina consultant, John Mainwaring, ‘it is far more suitable for the harbour facilities to be located [there] where there has been human intervention and is protected from southerly weather’. The existing channel on this west side doesn’t cross any environmentally sensitive zone and could easily be widened for commercial craft. In addition, there’s space nearby for car parking and infrastructure.

These recommendations for the harbour’s relocation have been ignored by Council because it doesn’t enable a land reclamation in Moreton Bay for high-rise development.

The facilitator of the workshop, Shane Thompson, President of the Australian Institute of Architects, said that due to the nature of the reclamation, there could be no underground carparking beneath any of the 10-storey blocks, which means that the bottom 2 storeys of each block – i.e above ground – would be for carparks. His overall comments on the Walker proposal for Toondah: ‘This is a very poor quality piece of work and unworthy of the professionalism that should be expected and available in this part of the world and what the residents of the Redlands deserve. We can only assume that whoever has been responsible is inexperienced or has been inappropriately directed.’

Another attendee, Brit Anderson, Emeritus Professor of Architecture and Planning, University of Queensland, said: ‘The Toondah Harbour PDA represents a grossly oversized and inappropriate project on a sensitive site. The implications are seriously problematic on many levels including the environmental, technical, social and architectural…’

The Council has been remiss in failing to address the impacts of this development of 3,600 units

Traffic congestion and dust that will be blown over Cleveland for 20 years have been ignored. No discussion about new roads, schools or extensions to hospitals or public transport. No acknowledgement how the 20 or so cafes and shops planned for Toondah will drag business away from a suffering town centre or impact koala populations.

A report into development in the Redlands by planning consultants, Urbis, found there would be no residential shortfall and hence no need for major projects until 2041. And since this 2014 report, there have been well over a thousand units and houses been built with many more planned. And then there is Shoreline, another development of 10,000 people just approved for southern Redlands.

Relocating the harbour would be popular with most residents, but there are some Council members and the Mayor who rarely listen to constituents, the science or those with the skills and experience. They have obligations only to their campaign donors: developers. The community are angry that the need for a refurbished harbour has been used for a land grab and profit. Instead of the Redlands City Council being the guardians of the public good and custodians of community values, they’ve become the facilitators only of growth and development.

There’s much to lose from a rejuvenated Toondah Harbour

But look what we gain when these guidelines are followed from a relocated harbour:

Redlands has less parkland than most comparable cityscapes. With a relocated harbour, a bayside reserve can become the City’s focal park and venue for markets, concerts and festivals. With heritage, views, breezes and koala habitat left intact, it will stretch from the Grand View Hotel down through the existing harbour site and carpark. With a new mangrove boardwalk and bikeway, it could link up with parks to the south and include a kiosk, interpretive centre, bird hides, koala lookout, swimming pool, kayak, sailboat hire and other amenities. From Bribie to Southport, no other bayside parkland would match it and residents would be proud.

This outlandish development must not get the go-ahead in any shape or form. It will contribute nothing to the area but will severely impact liveability of the area for decades and will permanently impact the marine environment.

It is important to make your views felt on this issue. It is open to public comment until 25 May 2017 – just 3 days away. It is easy to make a submission:

Then send your comments by:

For more detail of the referral documents click here