Government is not as bad as we think.

Apple received its early stage funding from US government’s programs and all the technologies which make the iPhone ‘smart’ were State funded: the Internet, wireless networks, GPS, microelectronics, touch-screen displays and the latest voice-activated SIRI personal assistant.

“Most of the revolutionary innovations that fueled the dynamics of capitalism – from rail to the Internet, to modern-day nanotechnology and pharmaceuticals — trace the capital-intensive ‘entrepreneurial’ investments back to the State.”  – Economics Professor, Mariana Mazzucato

Mazzucato says the US – the country that is supposed to exemplify the benefits of the ‘free-market system’ – has one of the most interventionist governments when it comes to innovation. The U.S government has not simply fostered the ‘…conditions for innovation …but funded early research and created the necessary networks between State agencies and the private sector.’

It’s the unknown potential of new technology that requires it to be developed in its early stages by government. The Internet started as a U.S Defense network connecting a dozen research sites. In biotechnology, nanotechnology and the Internet, venture capital arrived 15—20 years after investments were made by public sector funds.

Yet innovation advocates tell a story of ‘freewheeling entrepreneurs and visionary venture capitalists’ . Usual criticisms of the State as slow and bureaucratic are more likely in countries that sideline it.

In Australia and the UK it’s argued that innovation should be privately led. Yet British scientist Tim Berners-Lee developed internet protocols at CERN, the publicly funded European Organization for Nuclear Research. In Australia, WiFi and plastic bank notes were developed at CSIRO.

Assistant Minister for Innovation, Wyatt Roy, announced: “I’m a Liberal, I’d like to see lower taxes, less regulation, less government intervention in your life so you can do what you do so well which is be an incredible world-changing entrepreneur”.

Nonsense. Australia is a low tax, small government already, relative to the OECD. Even when superannuation contributions are taken into account. 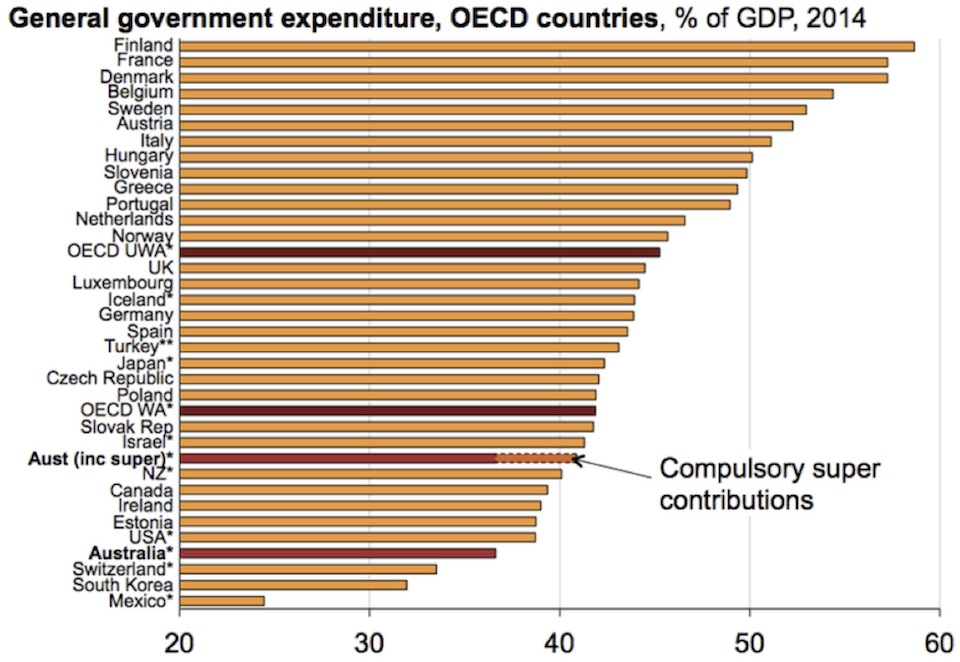 Among the most prosperous countries only the USA and Switzerland have lower taxes than Australia.

Moreover, high taxes does not impede economic growth. In fact high taxes and high growth go together. In their book, Governomics, policy analysts, Ian McAuley and Miriam Lyons, say that what counts in economic performance is “…the capacity of public agencies to operate with efficiency and responsiveness where markets fail”.

It was government that solved problems in the past, like putting a man on the moon, and it can only be government that will solve other big challenges we face in the future. Like measures to manage the transition from an economy based on an unprecedented mining construction boom to the new diversified economy of the 21st century.

“…the idea that governments should aspire …to have zero debt is deeply flawed and runs counter to how the most prosperous economies have done things for centuries …” says Economics Professor, Richard Holden. Austerity means people and small business hanging on to savings and investments.

The super-rich spend far less (in proportion to their income) preferring to build asset portfolios and blow up property bubbles. This doesn’t translate into a more productive economy.

Countries that reduced taxes and austerity had low growth, whilst the Nordic countries, with the highest taxes in the world, are the most prosperous. They found that equality and growth are not the result of the neo-libs’ inexorable laws but legislation.

Even the IMF and the World Bank declared that austerity has a negative impact on growth. Run a deficit they now say, borrow money at rock bottom rates and use it productively. Nicoletta Batini, the economist that altered their mindset, said: “If you diet when you are sick, it’s quite probable you’ll get a lot sicker.”

High rates of income and inheritance taxes were reduced in the English speaking countries from the 1980s which led to obscene inequality. Yet there was no trend towards growing inequality in other OECD countries. It has increased only modestly in Japan, Spain and Sweden, while France, Germany and Italy have experienced no change in inequality and the Netherlands had a small decline.

Where criticism of the institution of government prevails, faith in political institutions fall also. The generation brought up with this myth think government can’t do anything. Why get interested in an institution that doesn’t work and can’t help?

Declining level of trust has impacted further on political parties of the left as they are more committed to maintaining an active role for government.

When a society allows market forces to runs its economy it affects society’s values and hence its politics. It also infects commercial media who see support of market values to be in their best interest.

The Coalition got rid of carbon pricing and paid polluters industry assistance instead – costing $billions and causing emissions to rise. They provide $7.7bn worth of subsidies for fossil fuels and watered down renewable energy targets that lost billions in investment.

What distinguishes nations that are successfully transitioning to renewable energy – like Germany, Denmark and China – has nothing to do with the natural abundance of breeze, sunshine or entrepreneurs; behind the success of their profitable wind and solar industries is a proactive State.

ps  Waleed Aly has outlined the negative gearing problem and how important it is that governments address it. If you haven’t already watched The Project’s video on negative gearing – do it now!