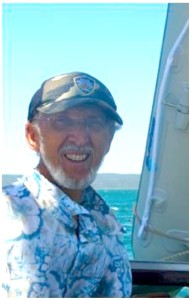 Graham was born in England but has lived well over half his life in Australia. He loves the country and it’s people but is disgusted with its politics. Now retired from seafaring and tourism, he finds himself investigating why government at every level is going so wrong. “Government is, after all, our most important institution” he says, “… so it’s vital that we get it right.”

“A society of sheep must in time beget a government of wolves.”

Everything seems to work fine in the world’s democracies. Elections, courts, tax authorities and public administration all function as they should. But nothing of any long-term importance gets done: Refugees, climate change, gross inequality, housing affordability and the death of the Great Barrier Reef scream for attention.

At local government level, taps are working, rubbish is removed, streets are cleaned and repaired, but the big problems like traffic congestion, public transport, sustainability, development-hungry planning and shortages of sports grounds, parkland and bikeways are ignored.

Political scientist, Sheldon Wolin called this, “managed democracies,” where ruling elites have so perfectly mastered the media and political and electoral processes to their advantage, that any competing ideas or attempts to address deep-set problems become unnecessary.

Twenty-first century politics has shut itself up in its fortress with its insiders, and is peeping out behind the curtains at the chaos in the street. The rest of us outside, looking on with incomprehension and living with the consequences, are aware of the ever-widening chasm between what our leaders talk about and what needs to be done.

On the world stage, austerity, Brexit, Trump, Panama Papers, corporate tax avoidance, populism … the political class and the media have convenient excuses for all these problems but the erosion of everything we hold dear is the result only of policies government chose or failed to implement.

Calamities that appear overnight are actually the climax of years of complacency and dysfunction. In the Redlands, there are individual homes being built with gutters of each house just 20mm apart, multi-storey unit developments that ignore the Council’s own guidelines and plans to build 10 storey townships with over 10,000 people on land reclaimed from the Moreton Bay Marine Park. While opportunities for heritage and ecotourism go begging.

Habituated to the ongoing decline in the function of government, it has become difficult to raise hope, look ahead and think how things could or ought to be. We blame politicians when things don’t work but we only get what we deserve. If we don’t participate and pay attention, we’ll never get policies that reflect our values or interests. As Bertrand de Jouvenel warned:

“A society of sheep must in time beget a government of wolves.”

Such meaningless democracy at the national and state level is mostly the consequence of flawed ideological demands of party politics and a professionalized party-political system. At the local level the problem results mostly from obligations to developers from campaign contributions to some mayors and councillors.

The need and the opportunity now prevails at the national level to do away with deficient, dishonest government and spawn something new. Because while we hesitate, disconsolate and hopeless, reactionary and populist forces gather strength.

Politics is democracy’s operating system and it needs an upgrade. Over the next few months I will show that it is only through more powerful and transparent government practises that will achieve the necessary engagement and transformative grip on the problems that confront us.